The No 1. Market Place for Professional AV and Broadcast Equipment 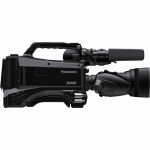 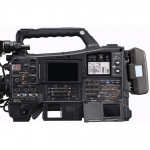 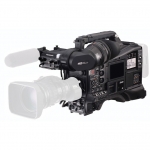 Package Deals & Trade-ins may also be available, as well as Ex demo and good quality used. Ask us for a quote you have nothing to lose. Full Local Warranty and Free Delivery within Australia for all New Equipment.

The Panasonic AJ-PX5000G 2/3" ENG Style Camcorder with P2 & microP2 Media Card Slots is a full sized ENG style HD camcorder with an interchangeable lens system that captures Full HD video to P2 or micro P2 media cards. The camera records HD Video in either NTSC or PAL compatible frame rates, to the AVC-Ultra family of codecs. In addition to the two microP2 slots and two standard P2 card slots, the camcorder incorporates an SD card slot for proxy/metadata recording. The camera body incorporates a 3.45" flip out LCD screen and can accept optional B&W or Color Viewfinders.

The camera is well suited to capture breaking news as it records approximately 8 seconds of video in standby mode, so you can record about 8 seconds of video before pressing the record button. For long developing news situations, you can record in loop mode, letting the camera record to your data cards and then start recording over allocated space on the cards. It records using codecs that include AVC-Intra and 10-bit AVC-LongG50/25 and supports Dual Codec recording with the Full-HD resolution of 1920 x 1080. Incorporated image control tools include: CAC (Chromatic Aberration Compensation) when using a CAC compatible lens, DRS (Dynamic Range Stretch and a choice of 7 Gamma selections. The camera features digital zoom, an electronic shutter, two rotating optical filters, focus assist, Zebra, Y-Get, a simplified Waveform and Vectorscope display, and five user assignable function buttons. The camera features 3G-SDI inputs and outputs, allowing you to pass feeds from and to other cameras, and a slot for optional two channels wireless receivers. A wired network port allows you to remotely control the camera using an optional studio remote panel. The built-in USB 3.0 port allows high-speed file copying to compatible storage media of 2TB or less directly from the camera without requiring a computer.

The camcorder features a 2/3" lens mount that allows you to use a interchangeable lenses. No lens is included with the camera.

The built-in 8.76 cm (3.45 inches) color LCD serves as a monitor when shooting, displays menus, and provides Waveform and Vectorscope displays. After recording, clips selected from clip and thumbnail displays can be played or deleted (single or multiple clips). In addition to VTR-like pause, fast-forward, and rewind functions, multiple clips can be consecutively played in any desired sequence for transmitting data from the shooting location.

Optional color and black & white viewfinders are available for this camera.

The camera supports two full sized P2 cards and two microP2 sized cards, providing you the flexibility to use your P2 cards or if you wish, migrate to the microP2 format.

Simultaneous recording to two media cards creates an instant backup of your recording.

While recording with the AVC-Intra100 or LongG50/25 codec, you can simultaneously record with the AVC-LongG6 low-bit-rate, HD codec.

The 3G-SDI input and outputs allow you to daisy chain your camera with other cameras to share a single feed, useful when shooting press conferences that is providing a single feed.

3G-SDI output #2 is separate from output #1 and supports HD-SDI or down-converted SD-SDI.

The aspect ratio can be selected from among Side Crop, Letter Box, or Squeeze mode when down-converting and outputting from SDI OUT1/SDI OUT2 terminals.

The HDMI connector allows digital A/V output to a wide range of devices with both professional and consumer specifications.

The camera does not include a microphone, but accepts a variety of optional, compatible, professional mics with a 3-pin XLR connector using an optional 3-pin XLR cable.

The Audio Input level adjustment (front) can be switched ON/OFF and allocated to desired channels.

Zebra: Select any two levels from among 0% to 109%, in 1% steps. A mode also allows two patterns to be overlaid and displayed.

Focus Assist: Features Focus in Red, Expand, and Focus Bar display functions. Focus in Red and Expand can be allocated to User buttons for one-touch control.

Shockless White Balance: A smooth transition occurs when switching White Balance modes. This is effective, for example, when moving from outdoors to indoors.

Five user assignable buttons on the camera body allow you to quickly access your most used functions.

The USB port supports USB 3.0 as a host, and USB 2.0 as either a host or device. You can connect an optional (AJ-WM30) wireless module that allows wireless LAN (IEEE802.11 standard) connection for tablet or smartphones linking.

The camera features a built-in Timecode generator/reader, and a Timecode in and Timecode out connector.

The Genlock connector allows you to sync this camera with other optional cameras for multi-camera shoots.

The UniSlot is compatible with available 2 channel wireless receivers.

The camera is equipped with earphone terminals (stereo mini-jack) and speaker.

An optional network function allows previewing, streaming, and metadata editing of proxy images with a PC or Mac.

Lens Files: Stores settings for interchangeable lenses. Eight files can be stored in the camera unit, and 64 (8 x 8) files can be saved on an SD/SDHC/SDXC memory card.

USB 3.0 (Host) for high-speed copying to an external HDD.

We Make it Safe for both Buyer and Seller

Request a Quote Ask a Question
Back